AIS is a system in navigation that serves to identify vessels, their dimensions, course and other data. This is especially important for the safety of private yachts and small boats.

Also applicable to other types of transport (rail, road, cargo, etc.) in regions where there is no or difficult ground communication. 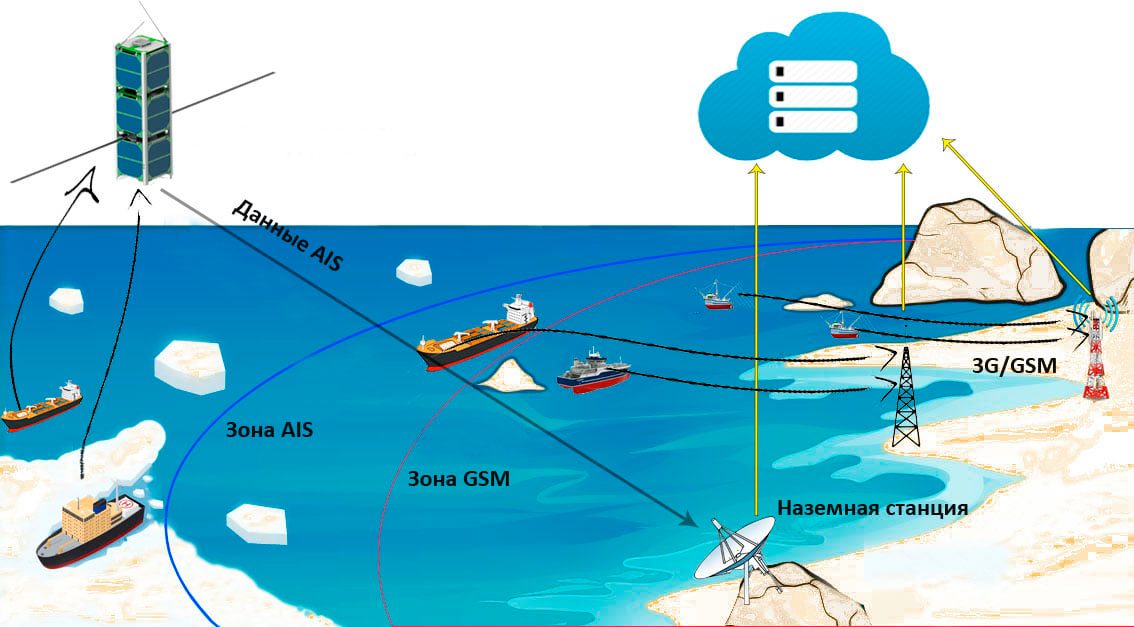 Project goal: product development - a specialized complex based on the CubeSat 3U format nanosatellite for the formation of the domestic AIS space constellation.

Relevance: At the moment, the Russian Federation does not have its own satellite means of obtaining AIS data for monitoring the movement of ships in the oceans and in its own water area. At the same time, obtaining such data is of increasing relevance in connection with the development of the Northern Sea Route, the development of shipping in the Azov and Black Seas.

Solution: a low-orbit constellation of nanosatellites with AIS signal receivers based on a reliable proven spacecraft suitable for mass production.

Product objectives:
• collection of LEO data from ships in the oceans equipped with standard onboard transceivers and AIS
• accumulation and subsequent uploading of data to ground receiving stations via a high-speed radio link
• work as part of a satellite constellation of similar vehicles

How the system works:

The AIS operation is based on receiving and transmitting of messages in VHF-band (161,975 MHz и 162,025 MHz), which covers area of ​​about 30 nautical miles. The AIS transmitter operates at longer wavelengths than radars, which makes it possible to exchange information not only at direct distances, but also in terrain that has obstacles in the form of not very large objects, as well as in bad weather conditions. Within this radius, ships can exchange information, building a full-fledged picture of the navigation situation in a given area on ship displays. Although one radio channel is enough, some AIS systems transmit and receive over two radio channels in order to avoid interference problems and to not disrupt the communication of other objects. The Global Navigation Satellite System (GNSS) provides the AIS equipment with the necessary data, synchronizes the operation of all systems in a given area.

• identification information about the object,

• information about the state of the object, obtained automatically with the control elements of the object (including with some electro-radio navigation devices),

• information on geographic and time coordinates that the AIS receives from the global navigation satellite system,