Yesterday the scientific and educational spacecrafts SiriusSat-1 and SiriusSat-2 exceeded two times the guarantee active lifetime. Instead of the declared 90 days of guaranteed work, the satellites worked 180 days. Almost half a year has passed as the vehicles were sent into free flight. Satellites continue to function normally and transmit scientific measurements data. The height of the orbit is now about 400 km. The low solar activity allows the spacecrafts to lose the height rather slowly. 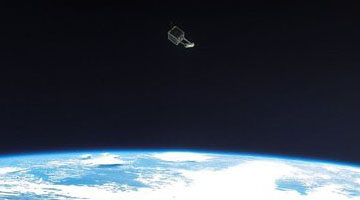 The Skobeltsyn Institute of Nuclear Physics of Moscow State University (SINP MSU) publishes the scientific data from satellites at the portal for monitoring space weather swx.sinp.msu.ru. All interested can analyze and use this data.

The satellites were assembled by schoolchildren at the Sirius educational center in Sochi on the basis of SPUTNIX’s educational kit OrbiCraft-Pro. The spacecrafts are equipped with payload made by SINP MSU. With the help of ROSCOSMOS and RSC Energia on July 10, 2018 they were delivered to the ISS board. On August 15, 2018 SiriusSat-1 and SiriusSat-2 were sent to free flight during scheduled extravehicular activity by the cosmonauts Oleg Artemyev and Sergey Prokopyev.