Plug-and Play technology for microsatellites has been experimentally confirmed

SPUTNIX specialists within the work on creation of a microsatellite platform TabletSat have assembled and tested the onboard control system equipment based on Space Plug-and-Play Architecture (SPA) specifications. This set of open standards has been developed by the American Institute of Aeronautics and Astronautics, AIAA, jointly with the U.S. Air Force Research Laboratory, AFRL.

The onboard control system is a hardware and software complex that on board a satellite unites support systems and payload into a unified information system. The onboard control system of the microsatellite platform TabletSat unites support systems (orientation and stabilization equipment, telemetry and telecommands, GPS navigator, power supply control), payload and high-speed payload transmission unit with use of serial data bus SpaceWire. 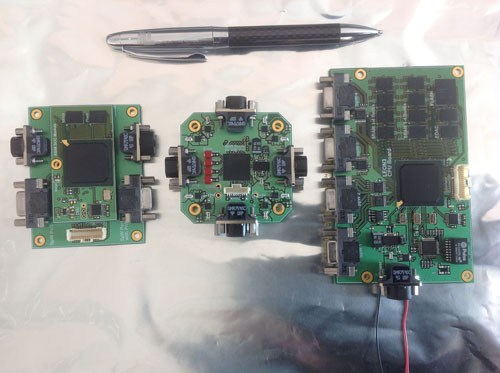 Based on SPA recommendations, SPUTNIX has developed its own set of Sputniх Plug-and-Play Architecture specifications (SxPA).  SxPA is a Plug-and-Play architecture whose key objective is to quickly aggregate and configure microsatellite subsystems with the use of Plug-and-Play principle. This principle allows to plug the device in the system without its preliminary preparation and without preparing the onboard control system, i.e. it ensures an automated process of device recognition and data exchange between devices.

The key difference between SPA and SxPA is that the SPUTNIX standard simplifies some SPA-architecture approaches, making it less demanding to SpaceWire network hardware and software resources. Thus it is optimal for the range of tasks solved by microsatellites of TabletSat class with weight of 10..50 kg. The standard is optimized for application in SpaceWire CAN networks but also allows to integrate into the system devices with 12C and UART interfaces through the use of standard minute and low-power adapters.

The functional onboard control system includes one or several SxPA-network manager processors, a network of multiport SpaceWire routers with an infinite number of subscriber units connected to them or with gateways to other non-SpaceWire subnetworks. The Plug-and-Play functions are supported in the onboard control system on the hardware and software levels.

For testing the SxPA technology SPUTNIX specialists have created a stand consisting of key components of the onboard control system’s infrastructure united into a network, and a number of SxPA-compatible subscribers connected to this network and their simulators (up to 50).

The test was about plugging network subscribers  in and out “on the fly” and controlling the process of their recognition/uninstallation by the manager, and data exchange between them. The experiment showed that the system was operating as expected, with the SpaceWire network capacity not less than 30 Mb/s, and with power consumption of all onboard control system’s components within several watts. 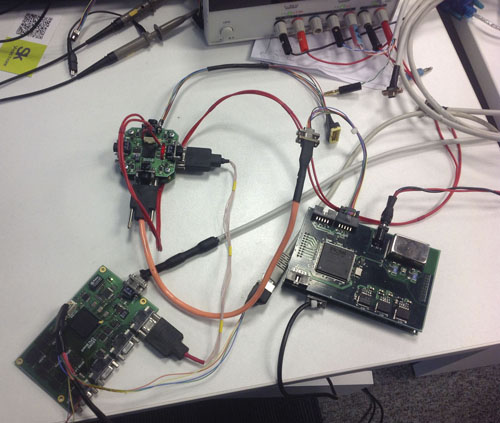 “The result is extremely important to us as it confirms the correctness of  the concept that we selected for the construction of a microsatellite platform and of the hardware and software solutions for implementation of a space Plug-and-Play. The next step will be to improve the software in order to obtain a fully functional  flight system of recognition of add-on support devices and payload”, - said Stanislav Karpenko, SPUTNIX Technical Director.

In the nearest future, the SxPA software developed by SPUTNIX with use of ANSI C is planned for distribution in the source codes with an open BSD license. SxPA specifications are available already now – they can be found on the company website www.sputnix.ru. Specifications for SxPA-compatible support systems under development by SPUTNIX for microsatellite platforms TabletSat can also be found there.

Pic.1 “Building blocks” of the SxPA onboard control system. From left to right: Multifunctional interface transition adapter from SpaceWire to data bus CAN, 12C, UART, 4-port router of the SpaceWire network with the power control function and RMAP support, onboard computer, the central network manager, is based on LEON3 processor and RTEMS operational system, with inbuilt 4—port SpaceWire router and CAN, 12C, UART interfaces.

Pic.2. Stand for the onboard control system testing