On March 22, at 9:07 a.m. Mocow time the launch vehicle «Soyuz-2.1a» with «Fregat» booster was successfully launched from cosmodrome Baikonur, putting into heliosynchronous orbits 38 spacecraft from 18 states. The launch operator was  «Glavkosmos Launch Services». Among other small satellites the Russian private satellite for Earth remote sensing named  «OrbiCraft - Zorkiy» made by «SPUTNIX» company was put into orbit.. It was accompanied by 4 spacecraft developed with company participation -  satellites CubeSX-HSE and CubeSX-Sirius-HSE for Earth observation and also two spacecraft for foreign clients. The start took place at the second attempt after the launch was postponed from March 20.

The launch of three Russian satellites was carried out within the framework of Duty on the Planet programme uniting technological contests and projects for school students in the field of space exploration – the programme of Foundation for assistance to small innovation enterprises (FASIE), «Talent and success» Fund, ScolTech, Skill development clubs movement and Roscosmos State corporation. The Russian Movement of Schoolchildren actively joined the programme with the Open Space project.

«Zorkiy» spacecraft is a modern ultracompact satellite for remote sensing developed on the basis of the new project of SPUTNIX company – «OrbiCraft-Pro SXC6» platform making the new generation of CubeSat systems after already serially manufactured SXC1 and SXC3.  Regardless the small size of 6U form factor (10x20x30 cm) and weight of only 8.5 kg, spacecraft is carrying the experimental Earth remote sensing camera with high resolution up to 6 meters per pixel putting it at a very high level for satellites of such size by world standards. The spacecraft was created with the grant support of the Foundation for assistance to small innovation enterprises (FASIE) in the interests of pre-university training systems for schoolchildren of Peter the Great St. Petersburg Polytechnic University and MIEM HSE. For the first time in Russia, the spacecraft of this size was manufactured with an optical camera by NPO Lepton JSC, which was founded by MIET graduates. The development of this camera and spacecraft was carried out in cooperation with the MIET University.

«The key task of «Zorkiy» satellite is to demonstrate the high technological level of the company and to serve as the basis for a series of modern locally developed remote sensing nano-satellites capable to compete on international market of nano-satellites and microsatellites», remarked the company CEO Vladislav Ivanenko.

CubeSX-HSE satellite was jointly developed by mutual efforts of Moscow Institiute of Electronics and Mathematics of National Research University «Higher School of Economy» (MIEM NRU HSE) and SPUTNIX. The spacecraftwas developed on the basis of OrbiCraft-Pro 3U platform of CubeSat format. The satellite is equipped with experimentalFresnel lens camera developed by Samara University and with high-speed X-band transmitter. 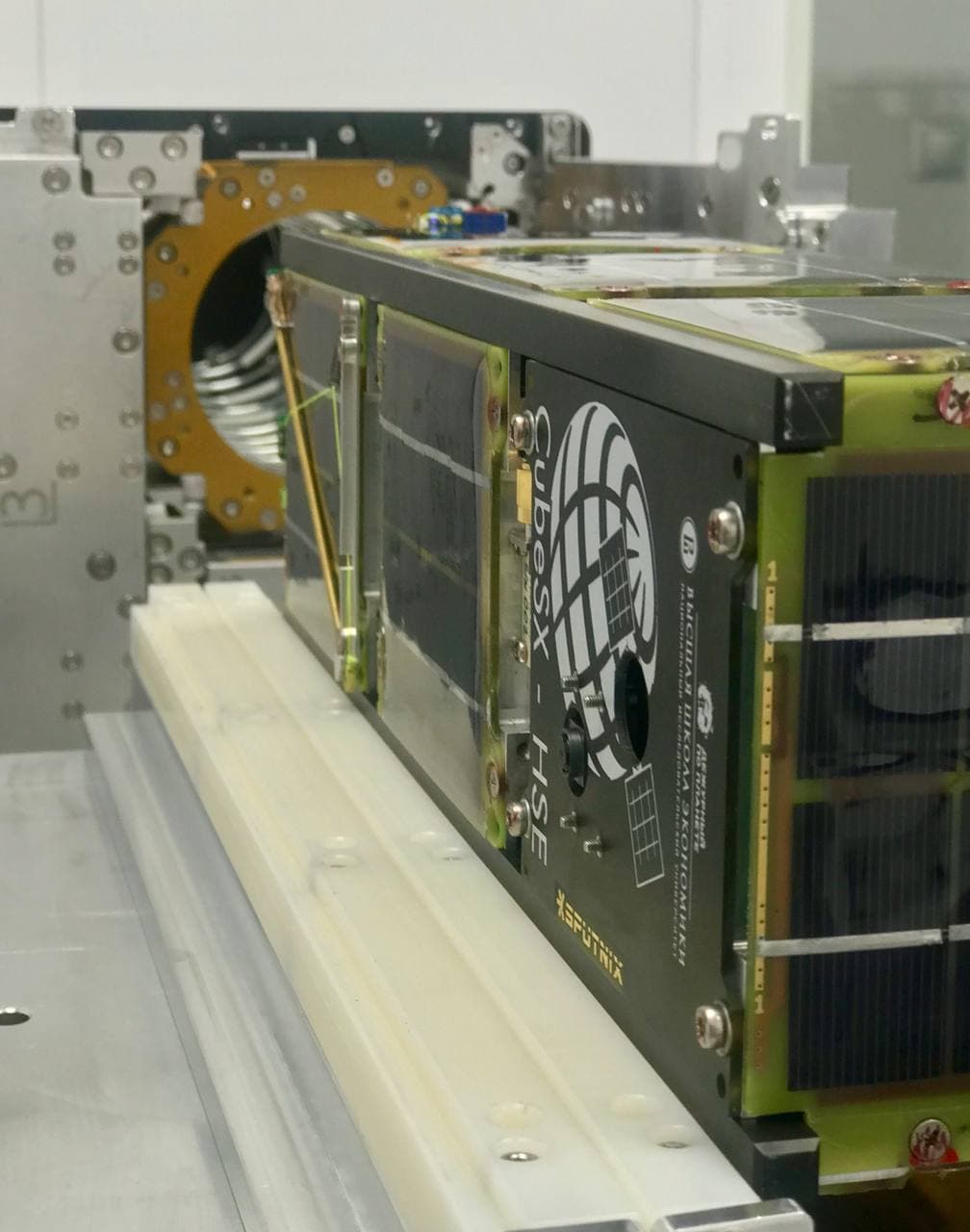 CubeSX-Sirius-HSE satellite was developed by united efforts of MIEM NRU HSE institution, «Sirius» Educational Center (town of Sochi) and SPUTNIX. The spacecraft was also developed on the basis of 3U CubeSat platform of SPUTNIX company. The satellite is also equipped with experimental Fresnel lens camera developed by Samara University and with high-speed X-band transmitter.

Testing and verification of control systems of CubeSX-HSE and CubeSX-Sirius-HSE satellites were jointly performed by students of MIEM NRU HSE institution, school students of «Sirius» Educational Center and scholars of Vocational school of NRU HSE together with specialists at the laboratory of Functional safety of satellites of NRU HSE institution and at Space Lab of «Sirius» Educational Center.

After «Zorkiy», CubeSX-HSE and CubeSX-Sirius-HSE deployment into orbit, flight testing of satellites will be performed, service subsystems developed by the company will be tested. The satellites must demonstrate their performance in orientation and stabilization, data transfer in UHF and X-band radio channels, optical systems shall be tested, as well as batteries and solar panels. Satellites are equipped with  high-precision three-axis ADCS system.. Control of «Zorkiy» satellite will be carried out from SPUTNIX mission control center in Skolkovo and control of CubeSX-HSE and CubeSX-Sirius-HSE satellites will be performed with assistance of control station and mission control center located at MIEM NRU HSE institution. It is planned to receive data from nano-satellites at X-band receiving station of SCANEX Technical Engineering Center and to use it for implementation of scientific, educational and ecological projects.

Alexander Serkin, CEO of JSC «Glavkosmos Launch Services» said: «By this launch several satellites developed on the basis of satellite platform of SPUTNIX private Rissian company were sent into orbit. We are very proud of our cooperation and we are positive about the beginning of satellite development in Russia by private companies, including satellites of CubeSat form-factor. In my opinion this opens new possibilities for their utilization for educational purposes that are successfully implemented for participants of this launch under the framework of Duty on the Planet programme. This opens the new horizons for resolving tasks in the field of communication, remote sensing and scientific programmes implementation. Some of satellites developed by SPUTNIX have been produced for foreign clients. We shall put every effort to develop our relationships with SPUTNIX in the future in the best inerests of our Russian partners as well as to promote the international projects».

Apart from local projects, SPUTNIX assisted in development of Tunisian satellite also launched this time. The satellite shall be used for testing of satellite «Internet of Things» techology. Also Saudi Arabia joined this launch and SPUTNIX also assisted it to develop the satellite for the university. It is planned to use the data received from CubeSat for training process.