Main/ About/ News/ The space experiment was successfully completed on the SiriusSat-1,2 satellites
News

The space experiment was successfully completed on the SiriusSat-1,2 satellites

On December 9, 2020, the space experiment was successfully completed on the satellites SiriusSat-1 and SiriusSat-2, the payload of which is a scintillation detector of electrons and gamma quanta in the range of 0.3-3 MeV, developed at the Institute of Nuclear Physics, Moscow State University. Satellites weighing ~ 1.4 kg, made in the Cubesat 1U format on the OrbiCraft-Pro platform developed by SPUTNIX. The SiriusSat satellites have been modified taking into account the specifics of launch: they are equipped with a handle for launching by an astronaut, flexible antennas, a system for manual activation of the spacecraft, and are also equipped with specially designed protective quick-release covers and soft transport containers.

The spacecraft were launched by astronauts from the ISS in August 2018 and carried out studies of space radiation up to the entry into the atmosphere. During the last week, 4 communication sessions were carried out daily, a large amount of scientific data was received daily. This made it possible to carry out unique measurements of particle fluxes at extremely low altitudes up to 180 km. The uniqueness of the data is that practically no measurements are taken at such heights. The term of their ballistic existence is very short, therefore, scientific vehicles are not sent to such ultra-low orbits, and scientific spacecraft descending from working orbits, as a rule, at such an altitude turn out to be inoperative. 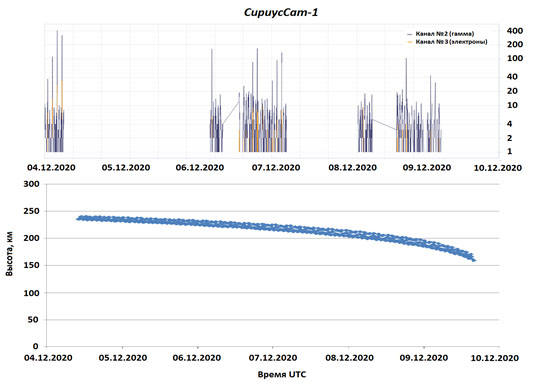 Earlier, for more than two years, scientific data were regularly received from the SiriusSat satellites both in the monitoring mode and in the mode of event recording of responses in a detector with a temporal resolution of ~ 10 μs. This made it possible to study fast variations in electron fluxes at the border of the radiation belts and in the region of the gap between the belts. The presence of two spacecraft with the same payload made it possible to compare the instrument readings on two sequentially flying satellites in order to separate temporal and spatial effects.

Particularly noteworthy is the educational component of the SiriusSat mission: the satellites were developed with the participation of schoolchildren at the Sirius Educational Center (Sochi), during the preparation and conduct of the space experiment, a number of master classes were held not only in Moscow, but also in Vladimir, in Yaroslavl, in Sochi. Sessions of communication with satellites were repeatedly demonstrated to students in real time at lectures, the data obtained is used by students in scientific work. The information received from the satellites SiriusSat-1 and SiriusSat-2 is available for educational purposes on the space weather server of the SINP MSU at http://swx.sinp.msu.ru/

Today, the next educational satellites based on the Orbicraft-Pro platform are being prepared for launch in the spring of 2021, in the creation of which schoolchildren of the Sirius center and students of the HSE MIEM participated. The "NRU HSE - ERS" and "Sirius - ERS" satellites with experimental ERS cameras on Fresnel lenses developed by Samara University will be sent to a sun-synchronous orbit with an altitude of 500-600 km. And at the end of 2021, a whole group of scientific-educational and applied-educational spacecraft for various purposes will go into orbit.