A small satellite "Tabletsat-Aurora" manufactured by SPUTNIX company is to be launched on June 19 onboard the "Dnepr" carrier-vehicle intended for flight testing of  "TabletSat" micro-satellite platform service systems, of X-band data transmission complex and of electric-optical Earth remote sensing equipment (ERS). Minimum expected active lifetime of the satellite is 12 months.

The hull of spacecraft, built as a "TabletSat" form-factor with the launch weight of 26 kg, is made in form of a hexagonal prism with side facets in the form of a deployed machined thin-walled panel of AK4 aluminum alloy. Structural rigidity is ensured primarily by the hull form. 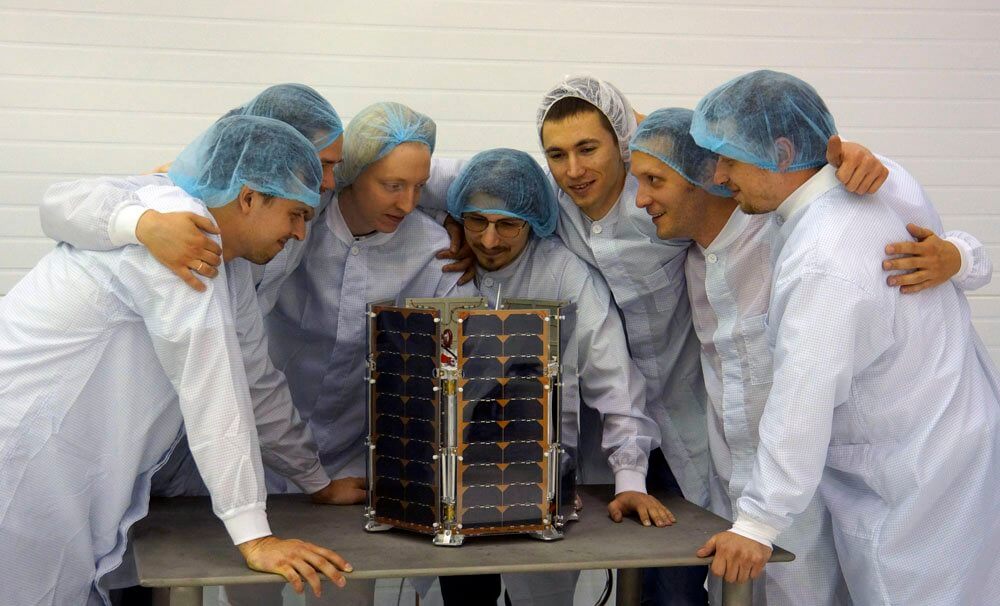 Six deployable solar arrays (solar flaps) are hinge-mounted on the facets of the upper (zenith) end, secured in LTA (launch-to-arrival) position with a fusible link and to be engaged into working position using springs. At the lower (nadir) end the X-band antenna is installed, with the lens of the ERS camera protruding.

The satellite is attached to launch vehicle adapter with pyrolocks and is separated with the help of an ejector. Magnetic torsion bars ensure satellite post-separation vibration damping.

Temperature control is passive and is achieved by coloring of external surfaces in white and by installing local heaters inside the hull. Thermal calculations showed that the satellite will not be heating much in the Sun; it will rather be exposed to overcooling instead*, therefore no thermal blankets are installed. Rather dense arrangement of the equipment inside the satellite enables to avoid the use of heat pipes. In general, modern SSVs weighing less than 50 kg are apt to hypothermia due to low capacities of the onboard equipment. There are several sources of heat in "Aurora"; in case of overcooling it will be enough to turn on some of the systems, and in case of overheating  - to turn them off or change the attitude.

* For example, in the eclipse the lowest temperature (+4°C) can be registered on batteries

Most of the time (except eclipses) the satellite is in solar attitude - with solar arrays facing the Sun, however, it is capable of changing its position in space to start taking images of targets on the Earth surface. A safe mode is also in place (angular rates damping), which, in particular, is activated immediately after separation from the last stage of the launch vehicle. In case of an attitude loss the battery capacity should be sufficient for three days of flight in this safe mode. 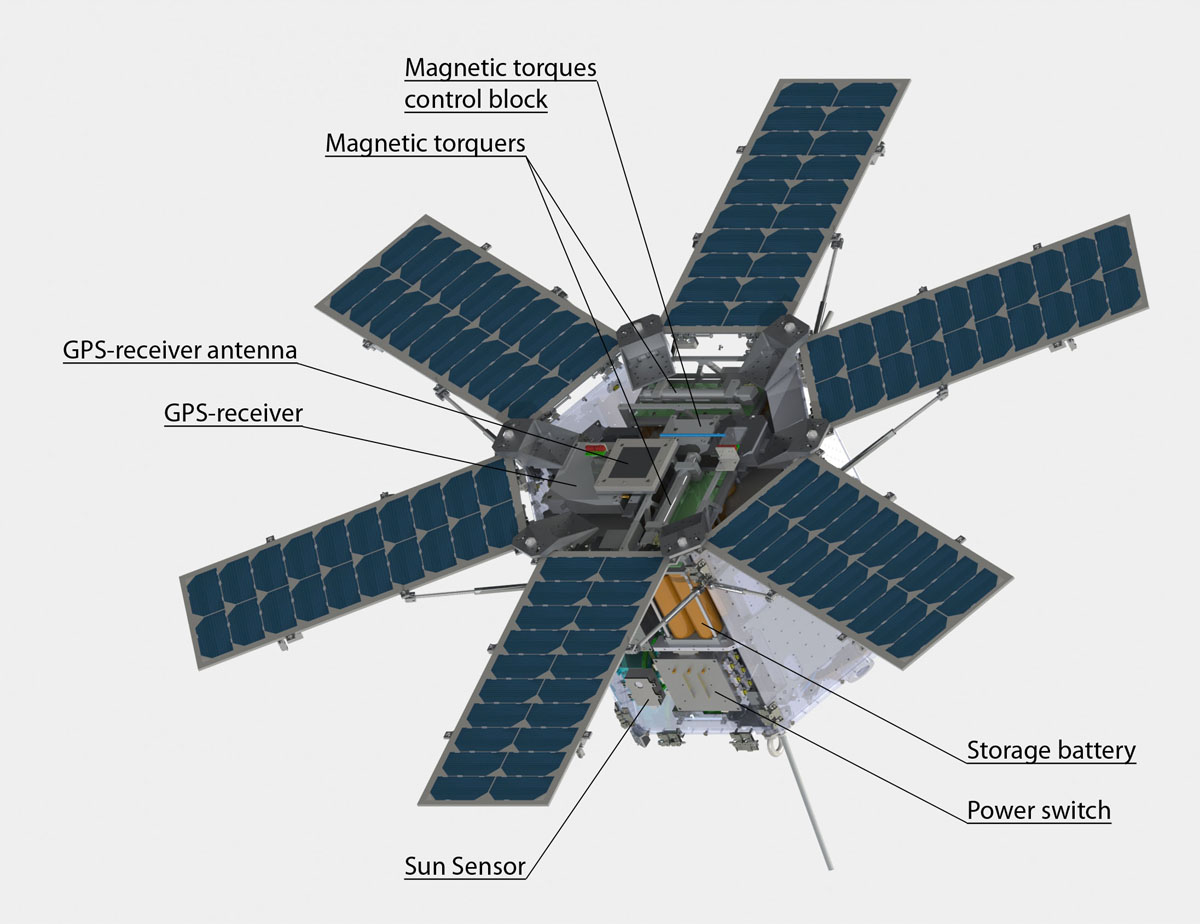 The satellite is complete with six main subsystems: power supply, attitude control, on-board control system, X- and VHF bands radio links and the GPS receiver.  Each subsystem is stand-alone with own processor. In case of contingencies (for example, an attitude system failure or a power dip) all payloads are automatically deactivated and the vehicle switches into the angular rates damping mode, allowing the mission control team on the ground to do troubleshooting.

Power supply system for ensuring the average capacity of 60W per orbit is represented by solar arrays with a total area of 0.36 m2 and two blocks of LiFePO4 batteries with total capacity of 16 Ah.

The attitude control system has three-axis, with four flywheels (three on main axes and one (diagonal) spare) and gyros. The system is equipped with a compact star mapper. The attitude control system boasts high performance (better than many of its counterparts). Thus, attitude precision is less than 6", attitude hold accuracy  -  better than 10.8", whereas stabilization accuracy is less than 3.6"/sec. The satellite is also equipped with a pair of magnetometers and MEMS sensors of angular rates.

The primary payload of the satellite is electric-optical camera. It enables to capture 40 x 50 km scenes at a spatial resolution of 15 meters per pixel. Imaging will be done frame-by-frame in the panchromatic mode. The camera has its own storage device with the size around 1 GBit  to store dozens of images. 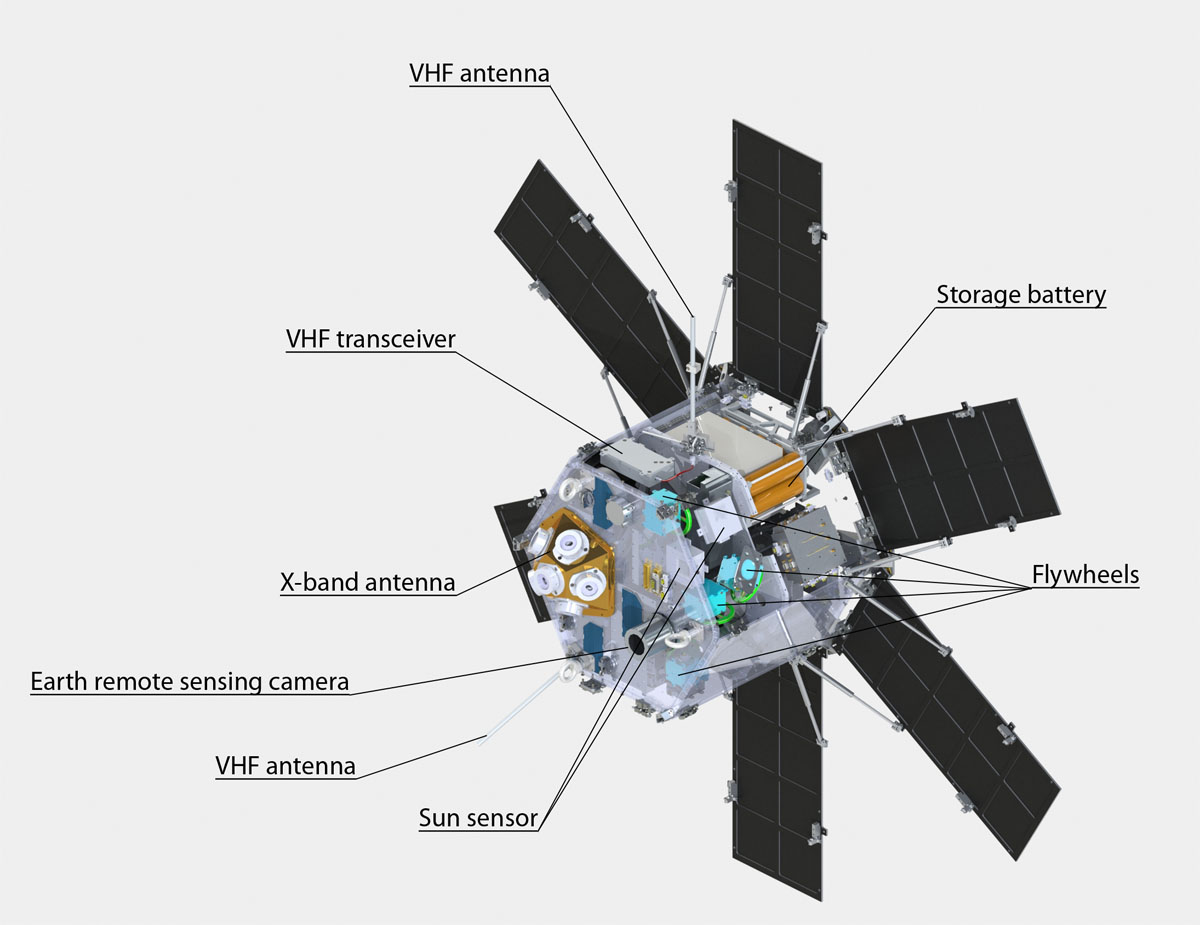 Information from the payload will be forwarded to the existing Uniscan™ ground stations of ScanEx company.  Data transfer rate - 70 Mbps. Data transfer is carried out for not more than five minutes per one pass, because of the available power system. Images are downlinked via X-band at a frequency of 8192 MHz, modulation type - BPSK. Power capacity of the transmitter is 8 Watt. The experimental X-band antenna has seven radiators, the aperture angle of each is 60 deg, i.e. antenna covers the hemisphere +/ -120 degrees.

Telemetry is dumped to the ground by two independent VHF band radio channels (435 – 437 MHz) via two pivot antennas.  Transceivers were designed at the Technical University of Berlin (TUB), software - at SPUTNIX company. The actual forward and down link data rate is approximately 1 Kbps. Telemetry is stored in a special onboard drive and is downlinked by commands from the ground, as appropriate. It can be compressed "on-the-fly" using ZLib standard and can be unpacked in the same "on-the-fly" manner on the ground. Telemetry is organized as a data queue; If necessary, the operator may request information about the work of each system separately. Time-tagged telecommands for vehicle control are uplinked both for direct execution and as a "flight plan".

In addition to VHF transponders, the satellite is equipped with an experimental D-STAR Repeater also developed at TUB and intended for amateur radio operators around the world, operating on the 437.050 MHz frequency with the radiation power of 0.8 Watts through an independent pivot antenna.

The satellite equipment has a redundancy. In particular, in case of the main attitude control system failure, the backup subsystem of magnetic stabilization with a stand-alone processor module is available onboard. If one of the radio channels is "dead", the backup channel is more than enough. If the power supply CPU fails, the system has the option to run "bypassing" the processor. In this case, there will be no optional power supply, but the system will still be able to maintain the life of the satellite. 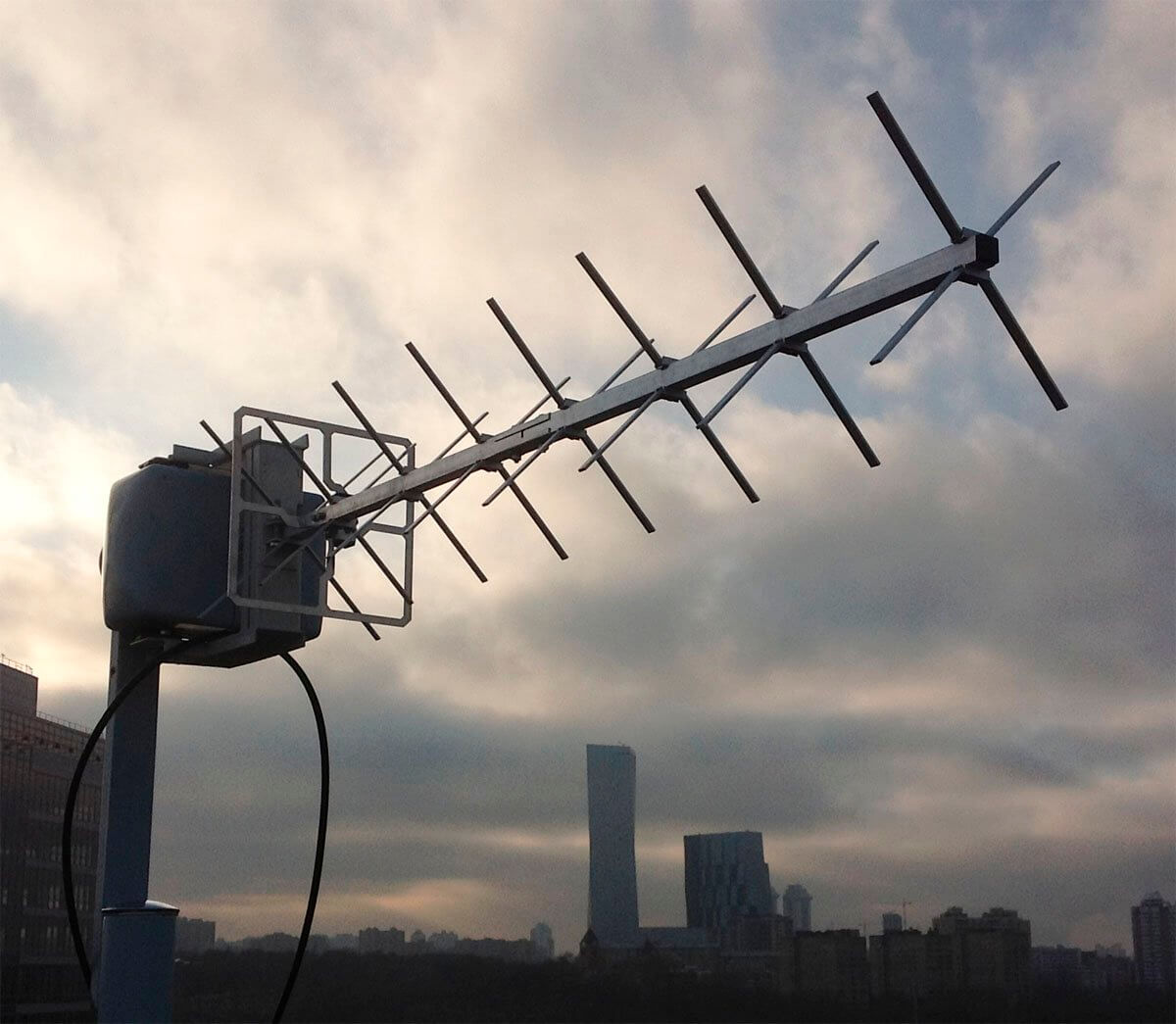 Telemetry reception and satellite control will be carried out using two ground stations of SPUTNIX, and the station of the Technical University of Berlin; images, as it was noted above, will be received by ScanEx ground stations. SPUTNIX company itself has a couple of standard ICOM radio stations at the Mission Control Center and two stand-alone adjustable LP antennas.

Telemetry data from the satellite is processed using a conventional personal computer through a special program, which interface includes a dual-panel console.

The left panel displays all the commands available for all subsystems:

1. The telemetry and telecommands system;

4. On-board computer with all its capabilities; 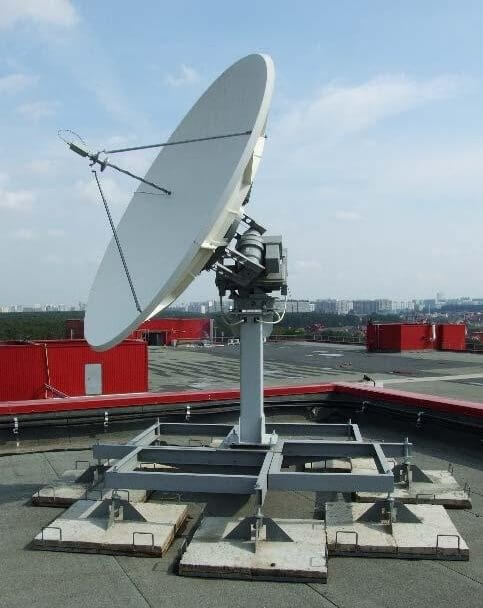 The right panel displays the controls. Commands are put here and customized, if there is such an option in settings. The operator issues a command, and it goes to the radio channel. If the satellite receives a command, the receipt appears at the bottom. A flight plan can be composed here and uplinked.

If the satellite downlinks telemetry, parameter values are updated in the tables (currents, voltages, attitude parameters). The time for imaging targets on the Earth can be selected with the use of GPS-receiver and based on ballistiсs forecast.